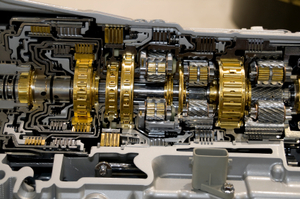 The Transmission is the part that moves your car through the gears as it increases and decreases in speed. Transmissions generally come in two types Manual and Automatic. (We’ll leave semi-automatic to the real car buffs.)

Cars with manual transmissions (clutch/stick shift) usually cost less at purchase than automatic transmission. They also use less fuel, are less expensive to maintain, have better acceleration times, and make better use of the engine’s power (which can be especially helpful for smaller engine cars).  Makes you wonder why so many of us drive automatics, doesn’t it? The downside of manuals is that they require more effort to learn, more work to drive and can be downright maddening in stop and go traffic.

Many drivers who want to be able to drink coffee on the way to work or do other multi-tasking couldn’t live without the freedom that the automatic provides since the right hand and left foot are free during driving. The manual requires the left foot to press the clutch and right hand to operate the gear shift. The automatic also scores a higher when compared to an improperly driven manual that can place undue stress on the engine and drive train.

Typical symptoms of transmission problems are: